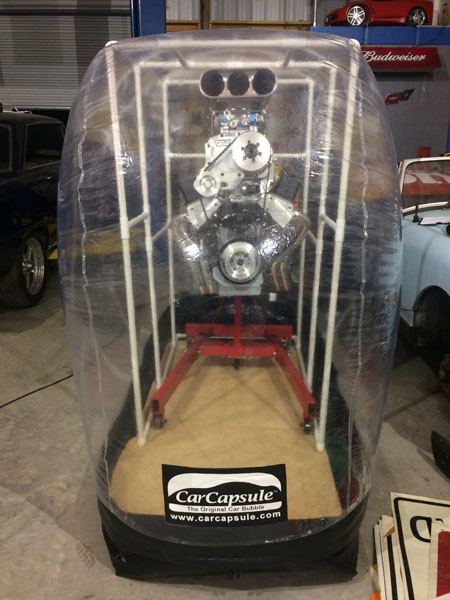 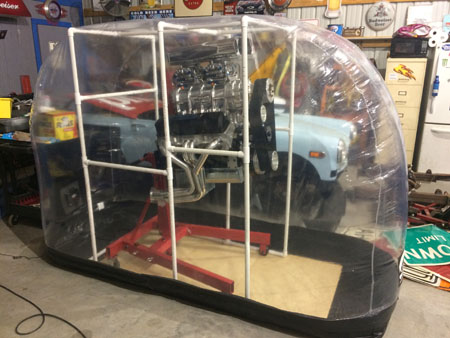 CarCapsule customer Ray has a unique use for his BikeCapsule:

I want to start by saying I have purchased your motorcycle capsule and I really like it, but I do not use it for a motorcycle. About a year ago, I spoke with someone at the CarCapsule facility, I believe he had said he was the owner and I was asking what the smallest Capsule was. I explained I did not need it for a motorcycle even though I own several, I wanted it to protect an engine that I was having built for my ’63 Chevy II. I had an engine in the car that I had spent a lot of money on the chrome and aluminum parts to dress the engine up and over several years it all tarnished and was always covered with dust from siting in my shop (it had no hood on it) and only driving the car on occasion. I know you sell a very nice capsule the Showcase which I plan on purchasing once the car is complete this time. Once I received the engine I had built, I knew it would be about a year before I got the other engine pulled, changed my whole front end and got the car painted so I thought why not get a CarCapsule and put the engine it to keep it looking good, especially since I had $18k in the engine with a lot of that for the aluminum blower and nice carbs , etc. I had mentioned what I was doing to the gentleman on the phone and he thought it was an interesting idea. So when I opened the one I purchased I found the card that said you could win a gift card for showing how you used it to help solve storage problems. I have attached some photos of how I used it.

I built the frame out of schedule 40 PVC so that when I unzip the capsule I just pick the front up and lay it on top then I put a piece of material over the zipper to protect it and push my engine in to keep it nice and clean until I can get to it and install it. I will be making one change to the frame, once I finished the frame and put it in I decided to change out the brace at the top to 45 degree rather than the 90’s I have on it now, that way it will not come in contact with the capsule at all. I get a lot of people that like the way it works. I’m not sure if it would be something others at bigger facilities would use to protect their motors prior to selling them, it would not have to be as long, the engine stand I have is a 2000lb stand so it is bigger than a standard one. Well that’s my story of how I used your capsule to better my life. And it just looks plain cool when people come in my shop and see it in the capsule. Plus it keeps hands off of it. You can look but you can’t touch. I hope to hear back from you folks to get your thoughts on how I used it. I look forward to purchasing the Showcase in about a year to put the car in.